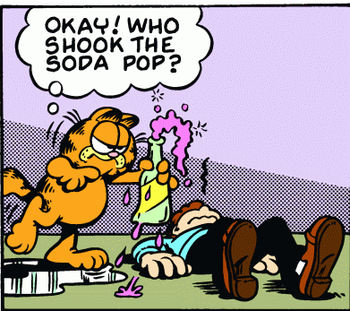 A classic scenario involving soda pops, or other carbonated drinks. Someone purposely or accidentally shakes the yet unopened can (or bottle), resulting in the unlucky person opening the can getting a shower of soda sprayed into his/her face.

Truth in Television: carbonated drinks are made by forcing carbon dioxide gas into a beverage under pressure. In an unopened bottle, there is an equilibrium between the carbon dioxide that has been dissolved into the liquid and the gas floating at the very top of the bottle. Opening the bottle results in a bit of fizzing as the pressure that has been keeping the gas dissolved is released. If the bottle is shaken however, some of the carbon dioxide that has been floating at the top of the bottle gets suspended in the liquid. This extra carbonation stays in larger (though not necessarily visible) bubbles than the already-dissolved carbonation. As soon as someone opens the bottle at this point, the large bubbles will rise very quickly to the liquid's surface, resulting in the soda shower.

However, as with many things fiction tends to turn this Up to Eleven when it comes to the power of the exploding suds. In extreme cases, characters may even weaponize a shaken soda can for propulsion or attacking.

In retaliation for stealing food out of his and Kipper's picnic basket, Tiger shakes a soda can before offering it to big eater Pig.

In retaliation for stealing food out of his and Kipper's picnic basket, Tiger shakes a soda can before offering it to big eater Pig.