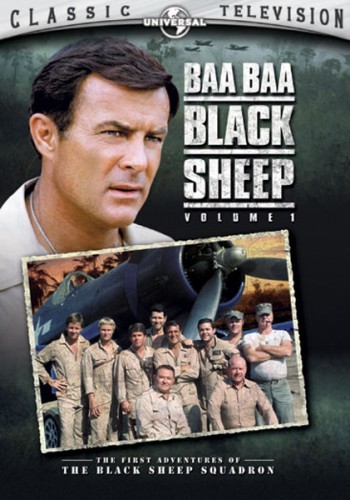 "In World War II, Marine Corps Major Greg "Pappy" Boyington commanded a squadron of fighter pilots. They were a collection of misfits and screwballs who became the terrors of the South Pacific. They were known as The Black Sheep."
— Opening narration
Advertisement:

An American television series starring Robert Conrad and following the exploits of the US Marine Corps fighter squadron VMF-214, based on the fictional island of Vella La Cava. The show lasted from September, 1976 to September, 1978, with a total of 37 episodes in two seasons. When not in combat, the members of the squad could often be found getting in trouble in and around base.

The show was originally called Baa Baa Black Sheep. For its second season this was was changed to Black Sheep Squadron in an attempt to boost ratings, as network execs thought it was being mistaken for a kids' show, and that's the title advertised when it's in syndication.