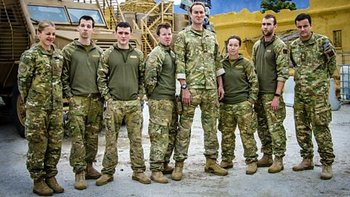 Bluestone 42 is a comedy drama about a British bomb disposal detachment in Afghanistan during Operation Herrick. It is a series about a bunch of soldiers who love being soldiers, and the camaraderie, bonds and banter they share, even though they are risking their lives defusing hidden bombs. The name of the show refers to the unit callsign, and as such, should be spoken "Bluestone Four-Two."

The show aired from 2013 to 2016, and ended after three series both because real-life combat operation in Afghanistan had ended and BBC Three was shutdown as a broadcast channel, and moved to an online channel.

Has a Character page in need of more love.