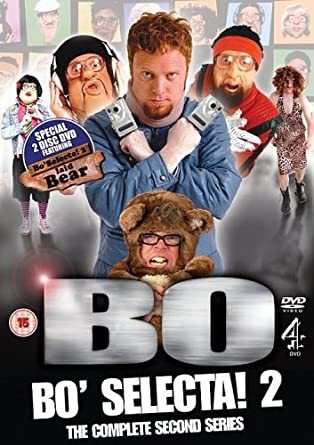 Bo' Selecta! is a British comedy franchise created by Leigh Francis that aired on Channel 4 from 2002-2006. In the show, Leigh impersonates and parodies several famous celebrities with Michael Jackson, Mel B and Craig David using latex masks often exaggerating their facial qualities. He presents the show under the guise of Avid Merrion, a Romanian stalker with a strange obsession with celebrites. Another popular character is the Bear, who interviews celebrities which often results in his "tail popping out".

In 2005, Bo' Selecta! was transformed into a sitcom involving the Bear and his adopted parents. However the fifth project went back to its original style called 'Bo! In The USA.'

Was also the first appearance of Keith Lemon.

This comedy series includes examples of: