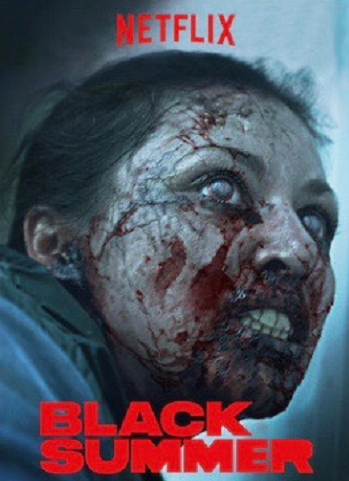 Black Summer is a 2019 prequel to the 2014 Syfy series Z Nation, released on Netflix on April 11, 2019. Unlike the original series, Black Summer takes place during the early days of the Zombie Apocalypse, and rather than following a story arc, it documents the fate of a handful of survivors during a very short period of time, divided up into 8 episodes.

The episodes are divided up into segments, which follow different characters trying to survive in an American suburb just as the zombie apocalypse is taking a turn for the worst, sometimes revisiting the same areas other survivors had previously been in. The main character is Rose, a woman who is searching for her daughter, who was on the last refugee truck that left the neighborhood before the Army tried to lock it down. She joins a group consisting of Spears, a soldier with a dark secret, a mute man named Ryan and a young survivor named Lance. Other survivors include Sun, a Korean girl who speaks little English, and William, a violent man with anger problems.

No relation to the 2007 Warren Ellis comic book series.

Compare Fear the Walking Dead, another zombie prequel series set before the events of the main work.