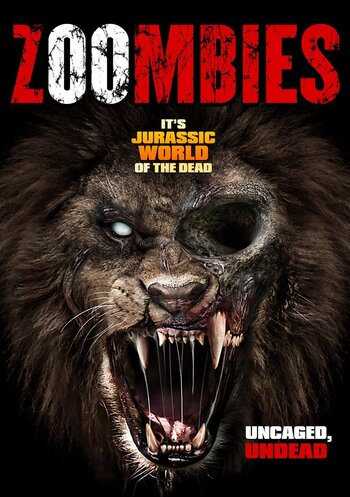 Dr. Ellen Rogers has just inherited the Eden Wildlife Zoo, a refuge for endangered animals, from her grandfather. As part of the preparations for its official opening, Ellen is hosting a small group of college-aged zoology students for their internship. However, juggling her responsibilities with the zoo, directing the interns, and caring for her daughter Thea is further complicated when some of the zoo's monkeys are brought to the veterinary clinic with an unknown disease, which soon spreads to the other monkeys there. The disease turns out to change animals into dangerous, flesh-craving zombies, and after the zombified monkeys take out the entire veterinary staff, they escape out into the zoo at large and start infecting everything else.

You can probably guess what happens next...

A sequel called Zoombies 2 was released in 2019. Also received a spinoff film, Aquarium of the Dead in 2021. You can probably guess what that one is about.

Tropes present in both films:

Tropes present in the first movie:

Tropes present in the second movie: