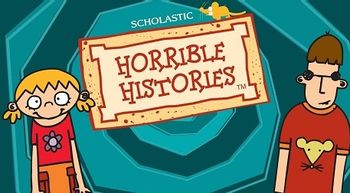 Horrible Histories is an animated series based off the book series of the same name, running from 2000 to 2002. it was devised by ABC for American television, but based on some very British books for children. British viewers more familiar with the live-action TV show have expressed bafflement as to why the cartoon version is all in American accents.note It was dubbed into British accents for its run on ITV, but where the show is currently available it only apppears in the original American-accented format.