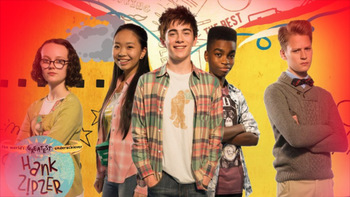 Hank Zipzer is a British children's television series which stars Nick James in the title role as a 12-year-old dyslexic schoolboy. The show is based on the series of books by Henry Winkler, who plays the character of Mr. Rock, Hank's music teacher.

Hank has dyslexia, and when problems arise, he deals with them in a way no-one else would - putting him on a direct collision course with his teachers and parents, who don't seem to appreciate his latest scheme as much as he thought they would... But, Hank always remains positive and convinced that the next big plan will deliver - after all, tomorrow is another day!