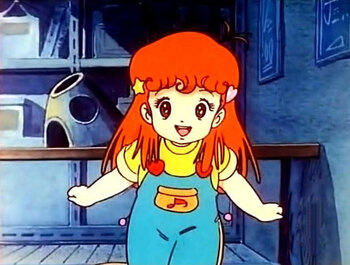 Hai Step Jun is a comedic Shōjo manga written by Yasuichi Ōshima in 1985, later adapted into an anime of 45 episodes and produced by Toei Animation.

The main character is a junior high student named Jun, a brilliant Child Prodigy who can create her own inventions. She falls in love with a much taller and older bad boy named Rei Kano (nicknamed Zero) who is a bit Book Dumb and only cares about motorbikes. While a relationship between them appears to be impossible, the two find a connection due to their common interest in mechanics.

The manga was only published in Japan, while the anime version was also broadcast in some European countries and is also known as Vas-y Julie! (France), Juny Peperina Inventatutto (Italy), Los Inventos de Eva (Spain), and Step Jun (Greece).