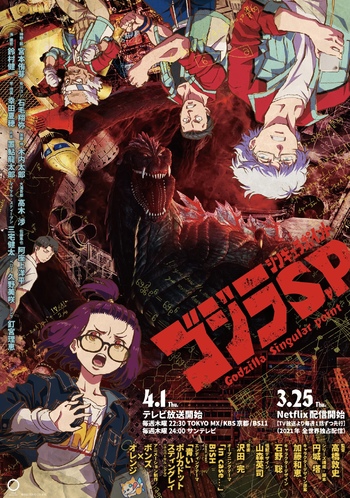 Face Down a Hopeless Future!
Advertisement:

Godzilla: Singular Point is a 2021 anime series based on the Godzilla series produced by Toho and animated by in-house by Toho Animation with assistance from Studio Bones and Orange, produced by Naoki Amano, Jiro Ando, and Takashi Yoshizawa. It is both the third Godzilla series to get a full televised release (after The Godzilla Power Hour and Godzilla: The Series) and the third anime adaptation of the title character after Godzilland and the anime film trilogy by Gen Urobuchi, but it is the first full anime series for the character as prior entries were mini-series or theatrical films. Creature design is being handled by Eiji Yamamori of Howl's Moving Castle fame with human characters designed by Blue Exorcist creator Kazue Katou and music by Kan Sawada of Doraemon fame. The series will air on Tokyo MX in Japan and Netflix internationally.

In the year 2030, kaiju began appearing across the world accompanied by a mysterious red mist, with Godzilla being the greatest of these threats. During this emergent threat, two characters end up coming together as part of the government response: Yun Arikawa, an engineer for the Otaki Factory's Jet Jaguar project that discovers the lost research of a disgraced biologist; and Mei Kamino, a graduate student studying mythical creatures finding parallels between them and the attacking monsters as well as their connection to Archetype, a mysterious physics defying element. Together, they must unravel the mysteries of the kaiju and find a way to stop the King of the Monsters.