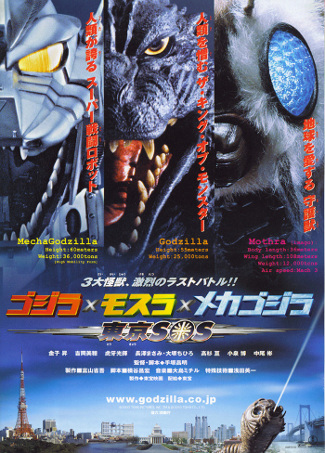 Godzilla: Tokyo S.O.S. is the sequel to Godzilla Against Mechagodzilla, with the two films being known as the Kiryu Saga by fans. Known in Japan as Gojira tai Mosura tai Mekagojira Tōkyō Esu Ō Esu.

After Godzilla's defeat in the previous film, Japan is warned by Mothra's twin fairies, the Shobijin, to put Kiryu to rest in the sea, as the bones of the dead should not be disturbed. The JSDF is reluctant to give up the only effective defense that they have against Godzilla, even after the Shobijin promise to have Mothra defend against Godzilla in Kiryu's stead. Not too keen on having another giant monster around, even if it's trying to help them, the JSDF refuse to retire Kiryu.

Unfortunately, Godzilla has recovered from his last battle and has claimed more victims, including a giant Kamoebas and an American submarine, and he is now heading straight for Tokyo again. When the JSDF is once again unable to stop the monster, Mothra is summoned to fight Godzilla by the grandson of an aged Professor Chujo, who's nephew works as one of Kiryu's mechanics.

When it becomes apparent that Mothra cannot hold her own against Godzilla, the JSDF launch Kiryu to support her. Back on Infant Island, Mothra's egg hatches, revealing twin larva who make their way to Japan to help their mother. Will the combined might of all four monsters be enough to stop Godzilla?