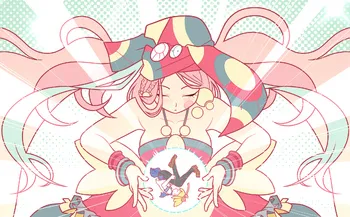 You have a supernatural character. Maybe you're going for maximum scares and have made their body or face grotesque and frightening, but don't know what else to do with them. Or maybe you want them to look fairly normal or beautiful and want one strange element or effect. An easy route to go in either case is to remove Earthly gravity from their hair.
Advertisement:

Although hair blowing in the breeze or flowing in water is often used as an image of beauty, particularly in advertising, the effect of someone's hair billowing and floating around them without any air or water currents to move it is strange and often frightening. The only explanation could be some otherworldly force or power, and it's usually not a good thing. Ghosts, witches, and other supernatural entities may have constantly-floating hair or just run an occasional supernatural breeze through it for a moment of drama, and this imagery is often used for fear, though it can be featured in lighter contexts for general magic.

Given that longer hair is more dramatic when floating like this and the connotations of long hair to feminine beauty, this trope is usually a feature of supernatural women. For this trope to apply, the hair does not need to be in constant motion, but the hair must be in sustained fluid motion at some point, and not through natural forces. If the entire being is floaty, the hair must stand out within that. Not to be confused with Prehensile Hair, where the hair moves on the bearer's direction and serves as a tool, or Dramatic Wind, where the visual may be invoked but with natural causes. If it's being used to demonstrate possession of incredible power, then it overlaps with Power Floats. Compare to Anti-Gravity Clothing, where, for some reason, a piece of somebody's outfit refuses to obey gravity.