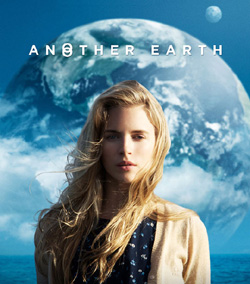 Another Earth is a 2011 independent Science Fiction film directed by Mike Cahill and written by Cahill and leading actress Brit Marling. It was distributed by Fox Searchlight Pictures. It is about the discovery of a duplicate of planet Earth and its effects on the lives of two people.

Rhoda Williams is a young woman who has just been accepted in MIT. She has a great future ahead of her, but after celebrating by drinking, she has a car accident when she is distracted by the sight of a planet in the sky that resembles Earth. The struck car belongs to a composer named John Burroughs, and his wife and children die in the crash. He himself is left in a coma.

The vision in the sky isn't an illusion; somehow, a duplicate of Earth, with the same people as well, has appeared near our planet, leading to worldwide shock and interest. But the story focuses on Rhoda's and John's lives. Rhoda spends four years in prison for the incident, ruining her life. John recovers but falls into despair. Wracked with guilt, Rhoda finds John, but doesn't tell him who she is. Slowly, they start bonding.

A further twist comes in the way of a contest to earn passage in a spaceship that will visit the Other Earth.

Tropes in Another Earth: