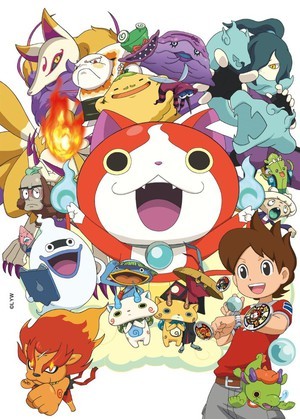 He's got a Yo-kai, Yo-kai Watch!
"Come on out my friend! Calling (insert Yo-Kai name here)! Yo-Kai Medal, do your thing!"
Advertisement:

Yo-Kai Watch is a multimedia Mon series by Level-5. After the original video game came out in July 2013, Yo-Kai Watch took over Japan, with an anime, sequel video games released while the original was still selling well, a Collectible Card Game, a collectible card game that ties into an arcade game, multiple different manga, and merchandise out the wazoo, including the titular Yo-Kai Watch and all the collectibles that go with it so kids can pretend to summon the over 400 different Yo-Kai. More overall information can be found here.

The game series, which remains the flagship product of the franchise, is about a fifth-grader (with the player's choice of a boy or girl, although the rest of the franchise leans on the boy as being canon) who finds a capsule machine in the woods while looking for bugs one day. When they open a capsule from the machine, they release a Yo-Kai called Whisper, who becomes their ghost butler out of gratitude for his freedom and gives them the titular Yo-Kai Watch. The Yo-Kai Watch enables the player character to see other Yo-Kai by shining a light on them. Using Yo-Kai Medals, gained from befriending Yo-Kai, the PC can also summon their Yo-Kai friends to battle other Yo-Kai who are causing trouble in the neighborhood. As the tale unfolds, however, the stakes our hero faces grow, and it turns out they may have a deeper connection to the Watch and the world of Yo-kai than anyone involved first realized...

Not to be confused with the action of looking out for the feral monsters called yao guai in the Fallout universe. Although, believe it or not, the names technically have the same meaning and the kanji for yo-kai and yao guai are written the same way (yao guai is the Chinese pronunciation for yo-kai).