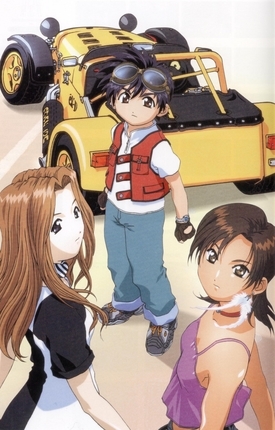 Yes. That kid in the middle has a license. Just wait till he gets nicked. note (From L-R) Lorna Endo, Soichi Sugano, Lisa Sakakino
Advertisement:

In the future, Automated Automobiles are used by people to get around. Unfortunately, the cars end up going haywire at times...

And that's when the eponymous force comes in.

éX-Driver (often abbreviated simply to éX-D) is a six-episode OVA series created by Kosuke Fujishima (You're Under Arrest!, Ah! My Goddess, Piano) and animated by Actas, A-Line and Xebec, released early in the Turn of the Millennium in 2000. The series focused around three teens (Lisa Sakakino, Lorna Endou, and Souichi Sugano) and their attempt to corral the out-of-control vehicles using manually-driven ones.

It was adapted into a movie in 2002. The story revolves around the three drivers participating in a race held in Santa Monica, California. However, they uncover a conspiracy involving the éX-Driver organizations after rescuing Angela Gambino, the daughter of a Corrupt Corporate Executive.