Animation / Club of the Discarded 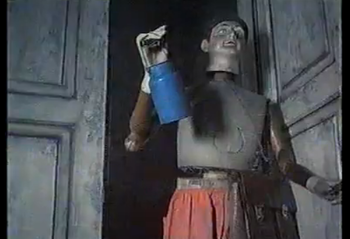 Club Of The Discarded, also known as Club of the Laid Off, (original Czech title Klub odložených) is a 1989 stop-motion short film by Jiří Bárta.

Set in an old building somewhere in Prague, we see several mannequins laying about. Through the magic of stop-motion animation, they start moving and act mechanically going about daily routines non-stop. This changes when said group of mannequins are thrown out by some live human workers and get replaced by a different crowd of mannequins, who are lively and noisy.

The film showed up late nights on PBS affiliates in the USA. It also is available for viewing on video sites like YouTube

and has been collected on home video, such as the Cartoon Noir DVD.

This animated film contains examples of the following tropes: