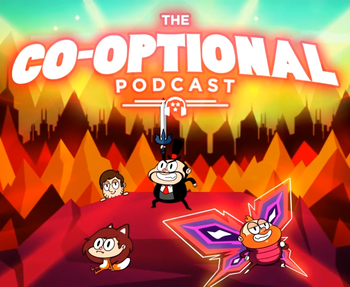 Coooooooo-optional! Tune in, we're talking to you!
Advertisement:

The Co-Optional Podcast is a weekly gaming-related podcast created by John "TotalBiscuit" Bain, Jesse Cox and Brooke "Dodger" Lawson, often with a guest appearance. It had a predecessor in the form of the TGS Podcast back when Polaris was called TheGameStation. It has currently gone through over 200 episodes taking anywhere between 2 to 3 hours apiece, with some conversations being used for animated snippets by JulianGD3

The podcast normally airs live on Tuesdays on TotalBiscuit's

Twitch channel. Though the VODs and animated episodes used to be hosted on the Polaris channel, due to creative difference new episodes are now hosted on his YouTube channel on Thursdays after the live show. You can view the entire library, including the animations, here.

If you wish to see a specific individual episode, check out the Recap page where they are all listed in order with their respective guests and links.

The group also hosts a Spin-Off of the podcast called the Co-optional Lounge, where they play board games via Tabletop Simulator. It is hosted on both WowCrendor's

and Totalbiscuit's channel, where you can watch from either of their perspectives.

Following the unfortunate death of TotalBiscuit in May 2018, his wife Genna Bain assumed his role as one of the hosts, as per his wishes. The show ended with no official announcement in October 2019 after Episode 257, with Jesse later indicating that he has no interest in starting another podcast to succeed it.

This list includes tropes from its predecessor, The TGS Podcast, for convenience's sake.

The podcast provides examples of: