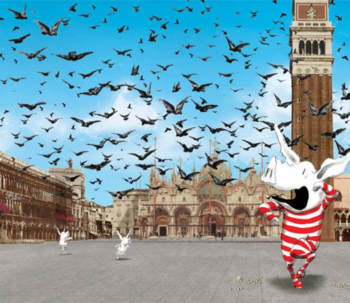 A large portion of cities are dominated by feral rock pigeons, also known as "city pigeons". These birds are a staple of many cities, however they're not always a welcome staple.

Most city pigeons originate from either domestic pigeons who were abandoned, or let go into the wild, centuries ago. With few predators in urban environments, pigeon populations skyrocketed. Alas, due to their general lack of fear towards humans, city pigeons are considered a nuisance by many, and they are considered a vermin ("rats of the sky" or "flying rats" are common appellations) due to hygiene issues.

Many works set in the city will have a joke where the protagonist's car, or even the protagonist themself, get hit by pigeon poop. If a character is eating, then they might either get mobbed by pigeons or their food will get stolen by one (a trait also attributed to seagulls). If a pigeon is an actual character, expect them to be either dimwitted, annoying, or an outright Card-Carrying Villain.

The only person who likes pigeons is probably the Homeless Pigeon Person. Pigeons often perpetuate a Bird-Poop Gag.