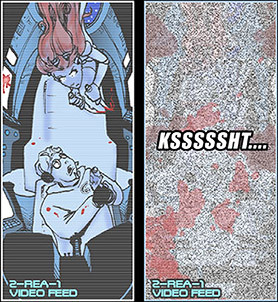 How do you know that a perimeter has been breached or that the bodycam-equipped soldiers you've sent in the alien hive have met a messy end? The screens that were giving you a visual feed have gone full of static, meaning that the cameras have been disabled or shredded, like their wearers. For maximum effect, a wall of monitor screens will go snowy one by one, until the entire bank of screens is filled with static.

This effect was the precursor to the infamous Blue Screen of Death, and was itself an outgrowth of the dead telephone line and the radio receiving only the static of a carrier wave with no signal.

See also Camera Abuse for cases where the camera is visibly hit or shaken, Static Screw for cases where this happens in a video game, and We Are Experiencing Technical Difficulties for cases where somebody cuts off the camera signal. Related to Insecurity Camera, in which malfunctioning cameras are ignored. Often goes together with Death by Transceiver.