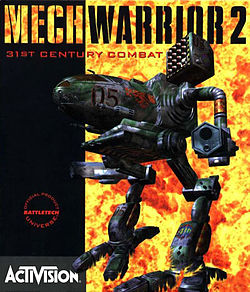 REACTOR ONLINE. SENSORS ONLINE. WEAPONS ONLINE. ALL SYSTEMS NOMINAL.
"It is the 31st century and mankind is once again at war.
The battlefields of the future are dominated by huge robotic war machines known as BattleMechs.
Piloting these awesome weapons of war are men and women, the elite of the elite, knowing that each battle could be their last.
They are... MechWarriors."

One of the most popular spinoffs of the BattleTech franchise, the MechWarrior series puts the player in the cockpit of the Giant Mecha that define the universe. With cutting edge graphics and fairly intense combat, these games probably brought more people into the universe than anything else. Battlemechs are handled like real weapons of wars, pilots die pointlessly, combat is brutal — entire torso sections and arms are blasted out to disable weapons, legs get shot out from underneath mechs, mechs explode from the inside from overheating their fusion reactor, and inside that armored cockpit you are just an unarmored and very squishy human.

The first game, MechWarrior, set roughly around 3025, placed you in the shoes of Gideon Braver Vandenburg, who is out to reclaim his birthright after his family was murdered. This game, published in 1989, is notable for featuring full three-dimensional gameplay (predating games like Ultima Underworld), as well as crude squad AI (which would be refined in later games in the series). A version of it also exists on the SNES, just Mode 7 and sprite based.

The second game, MechWarrior 2: 31st Century Combat (1995), was set during the Refusal War in 3057 between Clan Wolf and Clan Jade Falcon. Five years have passed since a cease-fire between the Clans and the Inner Sphere, however, the circumstances have changed. The player is given the option to play as a young warrior on either side, rising rapidly in rank as you led the campaign against the opposing Clan. The expansion pack, Ghost Bear's Legacy, followed after this conflict as the Draconis Combine attacks (you guessed it) Clan Ghost Bear. However, not all is as it seems. A standalone sequel, titled MechWarrior 2: Mercenaries, places you as an Inner Sphere mercenary, giving you the choice of running your own unit or joining another one. It's technically a prequel to the other MechWarrior 2 games, as it covers events in the previous decade. In-between the release of the Ghost Bear's Legacy and Mercenaries expansions, the Harmony Gold lawsuit over the Unseen and the following out of court settlement happened, causing those Mechs to be removed from all subsequent official games.

MechWarrior 3 (1999) takes place three years after MechWarrior 2 and in the aftermath of Operation Bulldog (the setting of the first MechCommander) on the planet named Tranquil, where a task force code-named Damocles is assigned to take down several major Clan installations while the newly-reformed Star League deals with the rest of the Clans (this is the Counterattack and Great Refusal arc). Due to a surprise attack, half of the Inner Sphere force is destroyed before it even makes landfall on the planet. However, the mission must go on. The expansion pack, Pirate's Moon, feature a new campaign letting you play as either a raiding pirate or a member of the Eridani Light Horse, the mercenary unit deployed to stop said pirates.

The fourth game, MechWarrior 4: Vengeance (2000) is set during the FedCom Civil War. Taking place on the planet Kentares IV and its moon, the plot's premise is similar to that of the first game, albeit much more involved. You play as Ian Dresari, trying to regain your birthright after a cousin affiliated with House Steiner betrays you. The expansion pack, Black Knight, continues Dresari's story as the Black Knight Legion arrives. A standalone expansion set around the same time, Mercenaries, puts the player in control of a Mechwarrior known only as "Spectre", who, incidentally, is a mercenary.

Early in 2010, a stand alone expansion, MechWarrior 4: Mercenaries, was released, with Clan and Inner Sphere Mech Paks put online for free download by MekTek, along with MekTek's own in-house MekPak, adding several dozen 'Mechs and weapons to the game. MekTek also made some modifications to the game itself, enhancing the HUD and 'Mech icons as well as making several Clan, IS and MekTek MekPak 'Mechs and weapons available in the Campaign mode. It was taken down due to legal issues due to the IP being transferred to a new owner, Piranha Games. If MekTek attempts to re-upload the free release, they will likely be sued.

MechWarrior 4 also made it to arcades as BattleTech: Firestorm for the Virtual World Tesla II pods. Earlier Virtual World BattleTech versions were unique to the pods, even having exclusive features like generator and coolant loop management, but missing others like jump jets. Later on they used a newer engine that would become the engine for MechWarrior 4: Vengeance, switching to Mercenaries later on. Some of the fan-made 'Mechs created for this game like the Deimos would go on to become Canon Immigrants for BattleTech itself.

A game trailer was shown in 2009 for a reboot of the series for the 5th game, in the vein of the first 4 games, set in 3015, but as time went on, the IP rights holder and game developers, Piranha Games — whose previous games include Duke Nukem Forever's multiplayer, and Transformers tie-in games — couldn't find a publisher for such a game and have since retooled the game into a free-to-play MMO: MechWarrior: Online. Initially taking place in the year 3049 (before the Clan invasion era) that will allegedly update storyline-wise each day after the August 1 2012 release date (which will be August 1st, 3049 in game universe, with the Clan invasion having begun in June of 2014, and 13 Clan chassis (each with 4 variants and several optional variant omnipods) released, alongside the current line up of IS mechs. The website can be found here.

Additionally, unveiled at about the same time as Online, Infinite Game Publishing, through their then dealing with Piranha Games, with ACRONYM Games and Roadhouse Interactive as developers, was MechWarrior Tactics. Running on the Unity engine to allow game play via the user's web browser, the game was designed as a 4 vs 4 'mech lance formation battles more in the vein of an interactive BattleTech table top game, with some changes. Players were to collect cards via "STAC Packs" for weapons and mechs with different manufacturer based abilities, and pilots with their own effects. However, the game has been in Development Hell, and as of December 2013, had no development team working on it, and development of the game has stopped entirely, and has become Vapor Ware with IGP going out of business in November of 2014 without notice. (More details can be read on the Trivia Tab)

MechWarrior 5: Mercenaries was announced on during MechCon 2016, and was released in December 2019. Set in 3015 during the 3rd Succession War, you play the part of a rookie mercenary accepting assignments from various factions.

Fan made games and mods: