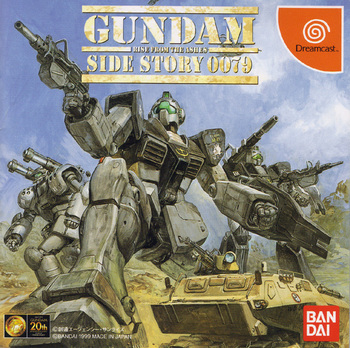 A 1999 Simulation Game set in the Gundam universe released for the Sega Dreamcast. As the title implies, it is a side-story to the original Mobile Suit Gundam, taking place during the One-Year War. The game takes place in Australia, which at the beginning of the war was ruined by Operation British. The player takes the role of Lieutenant Master Pierce Rayer, leader of White Dingoes, an elite mobile suit force tasked with helping The Federation reclaim Australia from the Zeon forces.

The game eschews many Gundam staples and tropes, rather than being about a ragtag group, likely including a youth who happened to luck into the conflict to save the day, it's about an already experienced mobile suit squad piloting their grunt suits in a campaign to clear out the Zeon in an already ruined land. In fact, there's not even a single Gundam in the entire game. As such it's one of the realest of the Real Robot Genre in all of Gundam-dom.

Good job out there, White Dingoes. Your next mission contains the following tropes: