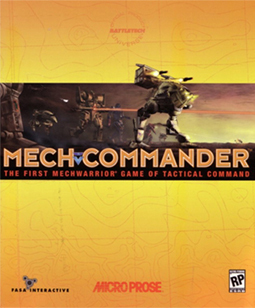 A pair of Real-Time Strategy games, with a heavy focus on tactical gameplay, set in the BattleTech universe.

MechCommander was released in 1998 and focused on Operation Bulldog, the Inner Sphere counter-offensive against Clan Smoke Jaguar, specifically the assault on the planet of Port Arthur. The player is in charge of Zulu Company of the First Davion Guards, and has to regroup their forces (scattered by a forced landing), harass the Jaguars and prevent them from entrenching, and ultimately seize the starport so the main invasion force can land.

An expansion pack, Desperate Measures, continues Zulu Company's story as they hunt down a renegade Smoke Jaguar commander on Cermak, eventually culminating in a race to stop him before he can crack a Star League weapons vault containing universally banned weapons of mass destruction.

The Gold edition has both campaigns available, as well as adding a few new features.

MechCommander 2 was released in 2001 and switches to the perspective of a mercenary unit arriving on Carver V, formerly controlled by House Liao, in the midst of the FedCom Civil War, which has divided the FedCom force there into groups loyal to House Steiner or to House Davion. Now, Carver V is in an uneasy peace, as the former FedCom units are reluctant to engage former comrades, and Liao's battered forces are in no condition to force either one off.

Several days into the Civil War, suspiciously well-equipped and organized bandits begin raiding Steiner's military outposts and stealing supplies. In response, Archon Katrina Steiner has hired your unit to deal with them, as she worries that Steiner reinforcements would spark another conflict on Carver V. The local Davion commander agrees to this, as she believes you will simply pull out once the job is done. You have other plans...

The main campaign is divided into three parts, and the player alternately works for a different faction in each part: Steiner, Liao, and a group of rebels supported by Davion. The Mechs that can be purchased will also change depending on which faction you're currently working for.

The second game had its source code released some time ago, and a relatively new overhaul called Omnitech

is being worked on.