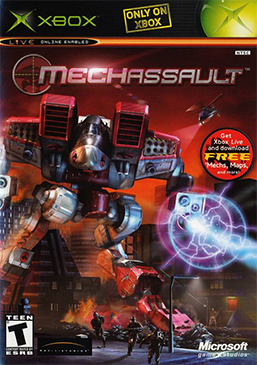 A Cougar is shooting you.
Advertisement:

MechAssault was a Third-Person Shooter Mecha Game developed by Day 1 Studios and published by Microsoft for the Xbox in November of 2002. MechAssault was initiated when Denny Thorley of Day 1 Studios approached Jon Kimmich of Microsoft about developing an original BattleTech game built from the ground up to support console play.

The game is set in the late 31st Century of the BattleTech universe, sometime after the Word of Blake occupation of Earth in 3058. The Player Character is an unnamed MechWarrior of the elite Wolf's Dragoons mercenary company. Together with Major Natalia Kerensky and Lieutenant Foster, the Mechwarrior has been sent to investigate the cessation of communication on the Periphery world of Helios. When they get there, their Drop Ship is shot down and they discover that the planet has been occupied by the militant fanatics of the Word of Blake jihad. The team must salvage new gear, fight off the Blakeists and find out why they're on Helios in the first place.

A sequel, MechAssault 2: Lone Wolf, was released on December 28, 2004. It picks up right where the first game left off, with the heroes recuperating on the planet Dante. The Blakeists soon make a return, in search of the MacGuffin that the team found in the first game. They soon meet up with a Pirate Girl whose Jump Ship can take them to other planets, so they can pursue the Blakeists and find more MacGuffins. This installment added the ability to get out of your 'Mech and into other 'Mechs, as well as battle tanks, VTOLs, and Powered Armor.

Both games featured online multiplayer over Xbox Live in the form of modes like Deathmatch and Capture the Flag. The second game also had a persistent "Conquest" mode in which players battled for control of territories over the course of many matches.

There was also an installment on the Nintendo DS, MechAssault: Phantom War. It is unrelated story-wise to the Xbox games, instead set many years later after the collapse of the HPG Network and starring a named protagonist, Mechwarrior Vallen Price. It was less well-received than the Xbox games, due to a lack of multiplayer and issues with the controls.