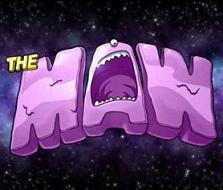 The pinnacle of alien evolution, Maw is a cowardly fat blob concerned mostly with snacking and lounging. He can, however, absorb the traits of anything he eats, is virtually indestructible, and can grow to unlimited size. If he wasn't a danger to all life in the universe, he'd make the perfect pet.
Advertisement:

The Maw is an Xbox Live Arcade (and later Steam-released) platformer by Twisted Pixel, later creators of 'Splosion Man. It involves an alien boy, Frank, who gets kidnapped by Galactic Bounty Hunters and then befriends an amorphous blob known only as the Maw. After the ship crashes, he teams up with the Maw to find their way off the planet. By helping Maw eat... and eat... and eat...

The duo must work their way through a variety of levels taking advantage of the Maw's ability to grow in size with every meal and take on the unique attributes of some of the creatures he devours. Your typical everyday tale of a boy and his loving pet. If that boy was an alien and his pet an unstoppable eating machine.

The Maw provides examples of the following tropes: