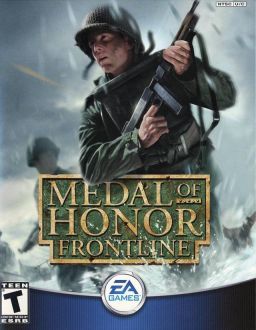 You don't play. You volunteer.
You are about to embark upon the Great Crusade, toward which we have striven these many months. The eyes of the world are upon you. The hopes and prayers of liberty-loving people everywhere march with you. In company with our brave Allies and brothers-in-arms on other Fronts, you will bring about the destruction of the German war machine, the elimination of Nazi tyranny over the oppressed peoples of Europe, and security for ourselves in a free world. Your task will not be an easy one. Your enemy is well trained, well equipped and battle hardened. He will fight savagely. I have full confidence in your courage and devotion to duty and skill in battle. We will accept nothing less than full victory!
Advertisement:
Good luck! And let us beseech the blessing of Almighty God upon this great and noble undertaking.
—Dwight Eisenhower, paraphrased for the game's intro.

The fourth installment in the Medal of Honor series, Frontline was released in 2002 on the PlayStation 2, with Nintendo Gamecube and Xbox versions following a few months later.

Once again, you play as Lt. Jimmy Patterson of the OSS, starting off with landing on Omaha Beach as part of D-Day. This time around, you've got a new mission involving a secret weapon the Nazis are working on. Later revealed to be an experiment jet fighter that can jeopardize the push against Germany if successfully made.

The game has six missions for you to accomplish, with two to four levels for each mission. Netting a gold star on each of these levels rewards you a medal for the mission.

The game received an HD Remaster for the Limited Edition of Medal of Honor (2010) for the Playstation 3.

Tropes that apply for this game

In this video extra from ''Medal of Honor: Frontline'', the humble American Sherman tank is discussed. During World War II, it was the mainstay of the US tank force, as well as a number of other Allied armies.

Example of:
The Workhorse

In this video extra from ''Medal of Honor: Frontline'', the humble American Sherman tank is discussed. During World War II, it was the mainstay of the US tank force, as well as a number of other Allied armies.