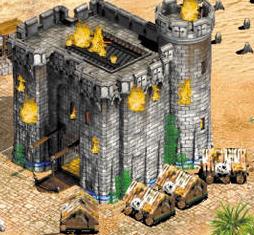 Who knew ramming could set stones on fire?
Whenever structures in Real-Time Strategy games are damaged, the damage is usually represented by a tiny flame that burns perpetually in the corner of the building, which grows as the damage increases. The fire represents the damage, but does not (usually) damage the building further. Many games also do not show non-fire indication animations, damaged models or death types, on infantry or vehicles, resulting in Critical Existence Failure.
Advertisement:

This trope is also common in Vehicular Combat games, where vehicles will start smoking and sparking when damaged.

Being on fire is basically the standard way to communicate "this thing is damaged" to players.

See also Shows Damage. Compare Fire Means Chaos, which is when fire is a shorthand for chaotic situations in general.