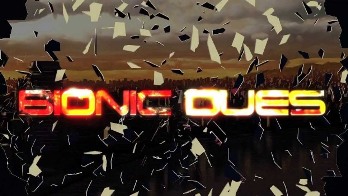 20 Minutes into the Future, a large city has been taken over by an army of killer robots. To combat this menance, a group of hardened military veterans are sent in to take back the city by using Humongous Mecha called Exos. Unfortunately, the robots completely curbstomp these veterans and cripple their base, leaving the city's hopes in the hands of the group's Sole Survivor, a completely inexperienced rookie. Namely, you.

You are given 50 days to prepare for the robots' final assault on your base by performing missions to scavenge supplies for your Exos, find upgrades for your Exos, and cripple the robot army in various ways. There are over 200 missions in any given game, and each mission takes up a day. After 50 days, the final battle automatically begins, and you must defend your base in an all or nothing Last Stand against the robot hordes. Fail, and you and the entire city gets nuked.

Bionic Dues continues Arcen's trend of a seemingly conventional genre having substantially unconventional gameplay. There are several types of Exos, of which you can use up to four, as well as different commanders for you to play as that each give you a unique bonus. Gameplay boils down to a top down, strategic turn based RPG with heavy Roguelike elements. The enemy robots start out goofy and ineffectual, but quickly become menacing and outright deadly. As you complete missions, you will gain many upgrades for your Exos, such as shields, weapon mods, propulsion devices, hacking modules, and more. Suffice to say, there is a lot of customization options.