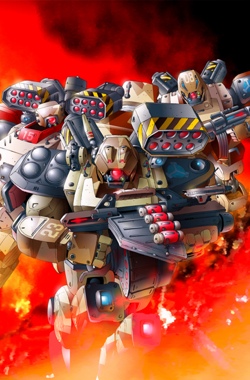 Heavy Gear was originally a tabletop wargame created in 1994 by the Montreal-based company Dream Pod 9. It centered around the conflict of the Northern States versus the Southern Territories on the planet called Terra Nova, with an expanding storyline. The centerpiece of these conflicts is the armored battle suit called the Heavy Gear, with both sides developing their own variants of the mecha.

The universe has a tabletop game, a character-based RPG, a card game, two video games, and an animated TV series to its name.

The Video Games, released under the titles of Heavy Gear and Heavy Gear II and developed by Activision, are mech simulators that mix mech controls and standard FPS controls. (Fun fact: Heavy Gear uses MechWarrior 2's engine, if anyone wonders why they play similarly. Heavy Gear II uses its own "Dark Side" engine.) In the first game, the player was a Duelist on the Northern landship Vigilance, and had to help the ship fight its way back to Northern Territory.

In the second game, an attack from Earth had the North and South call a cease fire, and the player leads an elite squadron piloting advanced Gears to stop the Earth attack from trashing the planet.

The TV series centered around the Heavy Gear championship series, where a rookie Gear pilot named Marcus Rover joins the southern Shadow Dragons and competes against the northern Vanguard of Justice.

Has two sister games (both of which exploit the minis game/RPG bifecta), Jovian Chronicles (IN SPACE!!) and Gear Krieg (In World War II!).

Heavy Gear Assault, the third videogame in the series, was being crowdfunded at the official site,

but details on the game were sparse and the ongoing discussion with developers on Facebook has dodged details on pledges, funding, and the actual existence of a development studio rather than Stompy Bot being a reskin of the MekTek modding collective from MechWarrior 4. The crowdfunding effort failed, and further news has not been forthcoming. Crowdfunding of the newest edition of the tabletop game, however, seems to be doing rather well for itself.

As of 2015, however, Heavy Gear Assault has managed to get back into development again by MekTek Studios and is in the early access stage. The game will utilize the Unreal 4 engine and is scheduled for a full release in 2018. However, development suddenly came to an indefinite halt in mid-2018 due to the publisher Stompy Bot Productions utilizing a dodgy cryptocurrency system that eventually swallowed up the company alive due to sunk costs; things went further south when TokenPlay, a then-unknown third-party publisher apparently behind the backing of the cryptocurrency system, froze up the assets of Heavy Gear Assault in late 2018 and, as of February 2019, hold the development of the game ransom with a $200,000 CDN offer to bring the game back to Steam, under very shady circumstances.

Time will tell whenever this issue is resolved.