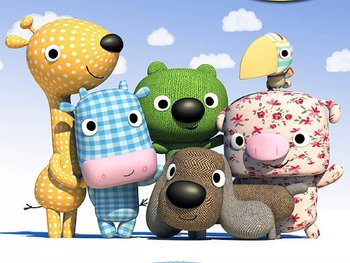 The Happetsnote Els cap de drap in Catalan and La tropa de trapo in Castilian Spanish is a Spanish All-CGI Cartoon Preschool Show based on the books by Laurence Jammes and Marc Clamens. The series is directed by Alex Colls Peyra and co-produced by Anera Films, Mas Llauner, and Lupita Books. It completed production in 2009, with the earliest release date known being in 2010 on Super3 in Catalonia. It has 52 7-minute episodes.

The series revolves around the Slice of Life adventures of six rag doll animal friends called the Happets: Rita the giraffe, Milo the bear, Talalo the toucan, Olga the pig, Mumu the cow, and Alfred the dog. Together they play games and learn new things about friendship, loyalty, creativity, and problem solving.

The Happets have also spawned two films that were loosely based on the TV series:

The Happets contains examples of: