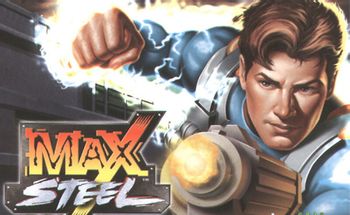 Jefferson Smith: Josh McGrath can’t run around the globe battling terrorists and still expect to lead a normal life.
Josh McGrath: Josh McGrath is out of the picture. The name's Max Steel!
Advertisement:

Josh McGrath is a 19-year-old extreme sports star whose adopted father works at the sports equipment manufacturing company N-Tek. It turns out this is a front for a counterintelligence agency, so when Josh makes an unscheduled visit during an attack on the facility by terrorists, he finds himself caught in the crossfire and present at an honest-to-god Freak Lab Accident: his body is infested with "Max Nanoprobes", experimental Nanomachines, leaving him on the verge of death. Teen Genius Roberto "Berto" Martinez realizes that the probes have integrated with his body and become symbiotic with him- and he's dying because they're running out of power. He is thus able to save Josh's life by infusing his body with the probes' specialized power source, Trans-Phasic Energy (or just "T-Juice"). Afterward, it is discovered that the accident has given him numerous superpowers; superhuman strength, speed, stamina, senses, and the ability to become invisible. Realizing that these powers plus his extreme sports experience make him an ideal secret agent, Josh creates a Secret Identity of an older, brown-haired version of himself: Max Steel. The series begins with a much less detailed explanation.

Max Steel was a Merchandise-Driven, CG-animated Saturday Morning Cartoon series which ran from 2000 to 2002. At its heart a spy show, with outrageous villains and plots at times straining believability, the main character's commentary often put the series in Affectionate Parody territory. In spite of its silliness, however, the show had well-defined characters, unusually complex plots, and was surprisingly dialogue-heavy for a show of its demographic. Aside from this it has a dark, realistic animation style and a few instances of genuine Nightmare Fuel.

After six episodes of season 1, the company making it, Netter Digital, went bankrupt and the series went over to another company (Foundation Imaging), with a marked improvement in the animation quality. After season 2, Foundation shut down too and so season 3 was made by Mainframe Entertainment, AKA the people who did ReBoot and Beast Wars. Season 3 also saw a move from Kids' WB! to Cartoon Network; the plot went in a different direction, although the basic formula of every episode remained untouched and They Changed It, Now It Sucks! seems largely avoided in the aforementioned small fanbase. Mainframe seemed to have an extremely low budget for the project as evidenced by many bit characters being 'portrayed' by the CGI models of larger characters from earlier seasons, sometimes to the point of mooks looking suspiciously identical to the first season's one-off villains. As well, the series finale is a Clip Show. After Season 3, a series of made-for-TV movies were released. For a while, the show was in the midst of a revival/Retcon in Latin America. More recently, a new, animated reboot was announced and aired on Disney XD. For that reboot, see Max Steel (2013).

The show was hosted on YouTube by Crackle in 2009 (Crackle is owned by Sony Pictures Television, which co-produced and owns the distribution rights), but had been made unavailable for viewing a while after. In 2022, Sony Pictures Television's latest YouTube account, Throwback Toons, began reuploading the series again in piecemeal drops.

(Not to be confused with Maxx Steele, head of the Robo Force, a short-lived line of suction-cup equipped robotic action figures created by Ideal in the mid-80's. A commercial can be seen here.