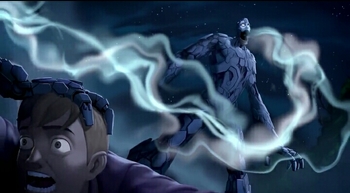 "Undead. No pity, no conscience. [Professor Mortum's] humanity gone. Just an insatiable hunger to consume us all. If you hadn't stopped that soulless monster...I shudder to think what might have happened to the world."
"If you are your people's greatest hope, then they will surely be disappointed. Nothing will stop my absorption and destruction of this planet...Enjoy your last breaths, thinking of your friends and family, all of whom will soon perish as well! All because you could not save them, for you are nothing but a weak Earthling!"
—Makino, to Max, 2013 series
Advertisement:

Max Steel has faced dozens of terrorists, supervillains, and criminals over the years, but some are above and beyond the usual mold in villainy.