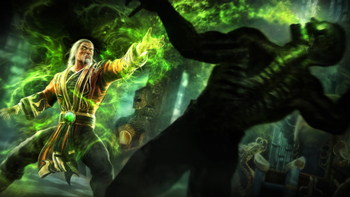 "Your soul is mine!"
"Watch, Miss Cage, as I rend your father's flesh...This is what awaits those who defy me: excruciating, exquisite death."
—Shinnok, to Cassie Cage, while torturing her father Johnny Cage, Mortal Kombat X
Advertisement:

Mortal Kombat features loads of kharacters who are all over the moral spectrum. But the utter cruelty and horrible deeds of some of these villains are more than enough to earn them a special place in the Netherrealm.

Examples in each group are ordered roughly by first appearance for canon works, and release/publication date for others.

Advertisement:
Films (both animated and live-action)
Other Media