Monster / Masters of the Universe 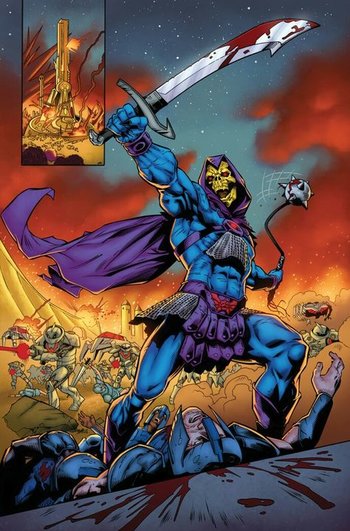 "The end is coming, and there is no going back...If I cannot rule this universe, I will slay it."
"I think because we as a show have so much interest in humanizing our villains, I really wanted Horde-Prime to be different. There is evil in this world. It's dishonest to say that everyone is capable or worthy of redemption. There are people who have stewed in their own hatred for so long that the only thing you can do is just... She-Ra banishes him. 'There's no place for you in this world.' If there was ever any good in Hordak-Prime, if there ever was love or kindness, this is someone who has prolonged his life for so long by taking over the bodies of others, for centuries. Eventually, everything became about his ego about remaking everything the way he wanted it, remaking it so he had complete control over it. In its most mundane form, I think that is what evil is."
—Noelle Stevenson

on Horde Prime, She-Ra and the Princesses of Power
Advertisement:

Masters of the Universe is a franchise that has been around since the 1980s, and He-Man and She-Ra have fought numerous foes. These are the worst villains to menace Eternia and Etheria.

Unless noted, works in each folder are by publication date/release date/air date.