Skeletor/Keldor of the House of Miro 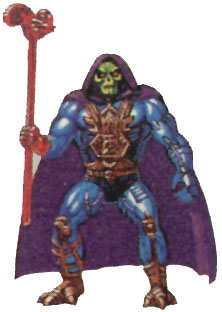 Played by: Alan Oppenheimer (80's); Frank Langella (Live-Action Movie); Campbell Lane (New Adventures); Brian Dobson ('02)
"Tell me about the loneliness of good, He-Man...Is it equal to the loneliness of evil?"

The older half-brother of King Randor, who tried to conquer Eternia and ended with his face horrifingly scarred and rechristened himself Skeletor, lord of destruction.

Played by: Anthony DeLongis (Live-Action Movie)
"I've waited a long time for this..."

A sword-wielding mercenary who expects to defeat He-Man some day.

A robot who is a walking time-bomb. Sometimes he's portrayed as part of the Snake Men.

Clawful/(real name pronounced through a series of claw clicks)

A member of the Karikoni, an Eternian race of crustacean warriors from Orkas Island. 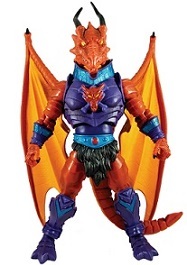 A recent addition to the Evil Warriors created for the MOTU Classics toyline.

An evil sorceress who works for Skeletor, but expects to overthrow him some day.

A robot duplicate of He-Man, created to trick the Eternians. 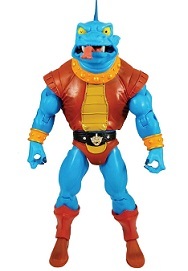 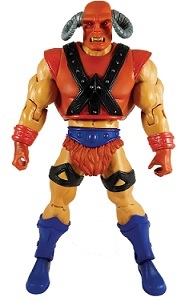 A horn-headed servant of Beast Man.

A former warlord of the Vine Jungle, who was in suspended animation until Evil-Lyn freed him to bolster Skeletor's forces. 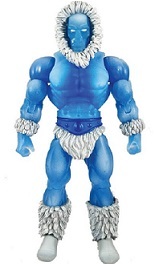 Evil master of cold who serves as Skeletor's northern agent

An Evil Warrior who has a metallic right hand 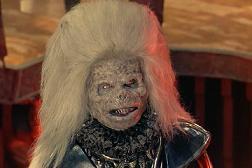 A bizarre, hook-handed creature serving as a mercenary for Skeletor.

King of the underwater creatures of Eternia.

An stealthy ninja who works for Skeletor. 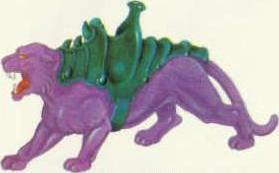 Skeletor's pet panther, that he sometimes rides in battle.

A reptilian warrior who is killed by Skeletor for his failure in getting the Cosmic Key.

"In my glow, even brave men tremble!"

A skeletal warrior whose body can glow and cause everybody who stares at it to see his/her greatest fears.

A warrior covered in spikes that give him the advantage in close combat. He has an extendable left arm with a trident as a hand.

A petty Paleezean thief who got the power to emit an awful odor. 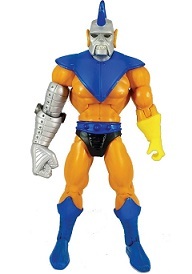 An Evil Warrior who tried to turn by Skeletor, who left him severely injured. Tri-Klops remade him as a Cyborg with a mechanical jaw and a robotic right arm with interchangeable weapons.

A warrior with three eyes that give him different vision powers. 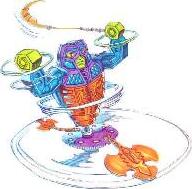 A spinning robot created by Skeletor stealing the machine used to create Rotar.

A pair of bounty hunters who were merged by Skeletor due to their failure.

One of the few remaining Arachna, a race of spider people.

Member of the reptilian species known as Caligars, who betrayed his people to join the Evil Warriors.