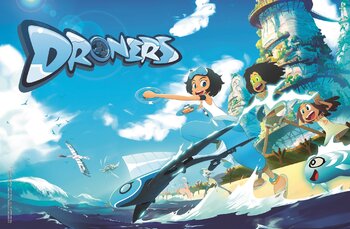 Droners is a 2020 French cartoon created by Pierre Cabissole and Sylvain Dos Santos. It could be superficially described as "Pokémon meets Ōban Star-Racers". It airs on Tfou in France and is currently receiving an English dub.

On the Ocean Planet of Terraqua (possibly Earth in a far future), several centuries after a Great Cataclysm and a Great War that changed the face of the world, society thrives again on various archipelagoes. And the biggest one is currently holding the Whale Cup, a Drone racing championship organized by Wyatt Whale, inventor of the environment-friendly technology that powers most drones, called G.En.I.Es. Participants come from far and wide in hopes of winning the first prize, which is to become Wyatt Whale's new apprentice. The story follows the heroic Team Tikis, who hope that winning the race will allow them to save their island, still at risk of sinking under the ocean. But competition is fierce, and not all teams have such noble motivations to win...