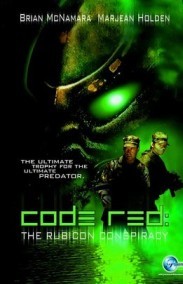 Code Red: the Rubicon Conspiracy is a 2001 TV movie aired by UPN involving a dishonorably discharged Army Lieutenant by the name of Peter Doyle (played by Brian McNamara) who is called in for a rescue mission regarding the Rubicon Station in the midst of Africa. His brother, James Doyle, may be the last remaining member of the last mission squad. He was also the reason for Peter's discharge, The Rubicon Station has a nuclear failsafe due to detonate in 20 hours if it's not reset and there are local rebels in play. Furthermore, Doyle quickly learns that some of his opposition is not from this planet, but not all of them are enemies.