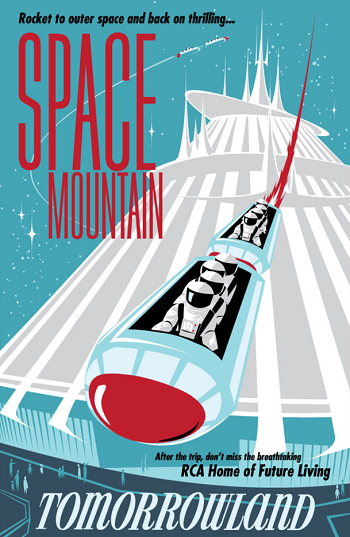 "Space shuttle, this is flight safety. Keep your hands on the handrail or inside the vehicle and remain seated while in motion. You are cleared for launch!"
Advertisement:

Space Mountain is an indoor roller coaster at the Disney Theme Parks that's themed around a thrilling trip through outer space. The ride itself is located in a giant futuristic-looking mountain, hence the title.

The origins for the attraction date back to early '60s, when following the success of the Matterhorn Bobsleds, Walt Disney was eager to add more thrill rides to Disneyland, prompting him to encourage his creative team to come up with an idea for a new indoor roller coaster. The resulting concept was of a space coaster set inside a massive mountain, that was first given the name "Space Mountain" in 1966. The project ended up being shelved for the time being, as it was deemed too implausible to build.

Nearly a decade later, the attraction would finally come to fruition at Walt Disney World, as the success of Magic Kingdom kick-started ideas for some thrill rides to add to the park. Due to there not being enough room available to duplicate the Matterhorn Bobsleds coaster in Fantasyland, the plans for a space coaster in Tomorrowland were revived. Since its opening in 1975, the coaster was brought over to several of the Disney parks across the world. Its locations include:

A graphic novel tie-in to Space Mountain incorporating other Tomorrowland attractions was released in 2014, presenting Space Mountain as a time travel research station harnessing the power of a black hole to create portals in time. Though initially planned as a trilogy, low sales and the desire to avoid confusion with the then upcoming Tomorrowland film ended up resulting in a Stillborn Franchise.

Tropes shown in Space Mountain include: