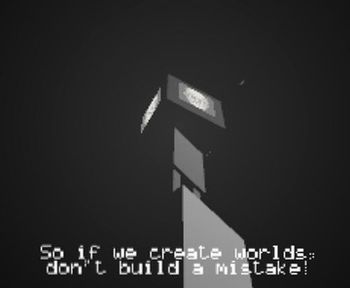 Words to live by, and to get confused by.
But I already knows... it's is right beneath my foots.
Advertisement:

The sequel to Mondo Medicals, also by cactus. As suggested by that page, it could make more or less sense.

The basic plot involves the actions of one Mondo Agency to prevent "the president" from being assassinated by seizure-inducing "natives" - or, as they are often called, LASER INDIANS! To do this, the Agency sends Agent-65386 to go to the president to make sure he's okay, but through the game, he must stop at various places and perform odd tasks, such as starting a machine the size of a skyscraper or killing the natives.

In between levels — or as they are now called "submissions", as in "sub-missions" — there are monologues from the Boss, your superior within Mondo Agency. Instead of screaming about cancer, he tranquilly philosophizes and hints what the next "submission" will be like.

Yes, everyone still has a TV head but they spin now.

It's going to have a sequel called Mondo Nation, and it's about fighting terrorism, and takes place in a world closer to our own, containing such wonders as fire and insects. Only it seems that it's a TV head that's on fire.

A Lets Play can be found here