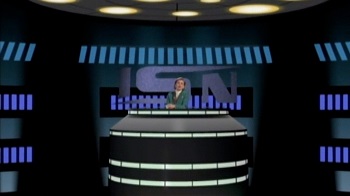 "Reporting live from the ISN news center in Geneva."

And Now For a Word

In the process of putting this report together, it didn't take us long to learn the most important rule of survival aboard Babylon 5: expect the unexpected.
—Cynthia Torqueman
Advertisement:

We start from a report from an ISN news desk with special correspondent Cynthia Torqueman, as we the viewers are treated to her experience of the controversial Babylon 5.

The first few minutes witness an armed Narn cruiser destroy a Centauri transport, and the first view is focused on Dr. Franklin trying to help the survivors of the strike, while Captain Sheridan offers "no comment." Londo is quick to point out how hostile the Narn are being in neutral territory, but G'Kar denies it saying he will receive a statement from his government shortly.

The next three interviews are from the chief docker Delvientos (about how every loading and unloading task seems to be always on a priority list), Lt. David Corwin (and how rewarding the experience is), and Captain Sheridan himself (about his service in Earthforce, and the chances of how long the station would last).

We then go to Dr. Franklin in the med bay, and he reveals why he hates jokes about people being spaced, one of his friends was spaced, suffocating after fiddling with switches on walls.

G'Kar comes up with a statement about the Centauri transport shot down: he claims said ship was a weapons transport that would be bound for the front lines in the Narn-Centauri conflict, and promises to put a stop to the weapons trafficking, even if it means shutting down Babylon 5 itself.

Torqueman brings in Earth Senator Ronald Quantrell who asks how beneficial keeping the station actually is. Sheridan comes back with a retort: The Earth Alliance hasn't recovered from the Earth-Minbari War and still don't have the technology to hold off the Minbari, Centauri or especially the Vorlons.

In C&C Torqueman comes to Commander Ivanova, who is investigating the recent attack, and she gives a very brief version of her life story to the reporter, though when Torqueman asks if there's more she simply says, "yes". Chief Garibaldi is next, and admits he'd rather have a quiet day where he's completely bored for twenty-four hours on Babylon 5. They're interrupted when Ivanova calls him up to the deck.

Garibaldi: See what I mean? Always something.

After the human staff are consulted Torqueman begins talking about alien population, including a shot of the mysterious Vorlon Ambassador Kosh, but is not able to talk. Delenn is next. She talks about her homeworld, how she had changed overall after since last year, but when the Earth-Minbari War gets mentioned, and Torqueman begins asking how the relatives of those who died would feel to see a Minbari with human features, Delenn nearly breaks down in tears until Ivanova calls to request her presence in chambers.

Ivanova's investigation is finished, and the League is session to discuss the findings. G'Kar's suspicions have been verified, and Sheridan is royally upset at Londo; Babylon 5 is in neutral territory, and not to be used as a staging area/munitions depot, and anything that causes that to change would put all the residents in a dangerous situation. Londo is quick to retaliate, but Sheridan and Delenn shoot him down, then G'Kar demands that the remaining Centauri ships be seized and searched, which Londo vehemently protests promising Centauri ships will defend themselves against any boarders. Just before the debate gets seriously heated, the Narn and Centauri ships outside start fighting. Delta Squadron is deployed, and Sheridan, after some deliberation, calls for a neutralization order (disable first, destroy as a last resort). Sheridan calls for any combatants to be thrown in the brig, then nearly orders Londo and G'Kar thrown in as well if they refuse to return to chambers, but calls for a "neater" action since the cameraman's on his left.

Sheridan: Then invite them again, as firmly and politely as you can. This nonsense has gone on long enough.
(cut to docking area where captured Narns are herded in)
Torqueman: The "nonsense" Captain Sheridan referred to is the Narn-Centauri war, which, over the past several months, has grown into a conflict which threatens to spill into other systems and lead to an escalation of hostilities. Prior to the battle we just witnessed, ISN spoke with representatives from both sides, in order to better understand the history of this conflict.

G'Kar gives his life story about the first Narn-Centauri War, how the Narns initially welcomed the Centauri but were enslaved. He tells how his father was hung on a tree after spilling some hot jala on the Centauri mistress of their house. G'Kar went out to see him then was able to run away and score his first kill. Next is Londo's take on the war, claiming they came to help a primitive race and that the Narn had started to resort to violence at first. The Centauri, of course, only want peace.

Londo's claim becomes suspect as a Centauri Battle Cruiser jumps in right on top of the station, and Londo calls up. He demands the suspected Centauri transports be returned to Centauri space, and until then any other ship will be interdicted or shot down.

Next a teenage boy, John, is seen complaining to his mother about how other kids don't like him and he seems to know what they're thinking. A Psi Cop appears and tells him that he may be a telepath and encourages him to be tested by the Corps. A few weeks later, John is a full-fledged member of the Psi Corps, and the Psi Cop encourages anyone who knows someone who might be a telepath or thinks they might be one to come to them. As the spot closes, there is one frame with the words, "PSI CORPS IS YOUR FRIEND. TRUST THE CORPS."

After the break, Torqueman waits outside the council chambers trying to get statements from Sheridan ("All sides are still talking.") and G'Kar, who says this is proof the Centauri are a menace and promises to make it clear to them this will not be allowed. He rushes off as Torqueman tries to ask what he means.

Back with Senator Quantrell, he and Torqueman discuss what happens next, the senator voicing concerns that having an outpost like Babylon 5 only puts Earthforce personnel between warring factions, and that the loss of life might have been avoided. Torqueman points out that they are at war, which means people die, but he retorts that it wouldn't have happened in their backyard.

In C&C, Sheridan calls the Centauri cruiser, telling them Earthgov has rejected their demands and if they make any hostile attack, the station has its weapons loaded to bear. After that he sends a single shuttle through. Several tense moment pass but it flies past the cruiser without incident.

On C&C there is jubilant applause, but just as Sheridan opens a channel, a Narn cruiser jumps in and assaults the Centauri cruiser and manages to destroy it. Narn cruiser then attempts to jump out, but their drives have been damaged and the ship explodes.

Torqueman: (at anchor desk) As journalists, we would be remiss in our responsibilities if we suggested that events such as those you've just witnessed were typical of the situation on Babylon 5. Like anyone else, they have good days and bad days. But there can be no question that it is a flash point that can only grow hotter as time passes. And yet, growth only comes through pain and struggle, so perhaps we should allow Babylon 5 time to realize, or one day, even exceed the dreams we have invested in it. We'll be back with some concluding thoughts right after this message.
Commercial
Torqueman: After the crisis was over, the debris cleared, and the bodies counted, we asked each of the people involved in this story one question: Given the danger, at the end of the day, as Mr. Garibaldi said, is it worth it?

Garibaldi says yes, they found out the Centauri were transporting weapons and put a stop to it. "We learn, that's what humans do." Londo also agrees, and learning lessons is one of the things that keep Babylon 5 alive. G'Kar presents his doubts, Ivanova gives a curt "yes", Delenn says yes, saying it's a "great gift, but a terrible responsibility." Senator Quantrell thinks we'll have to wait and see. Dr. Franklin says yes (because of medical intervention), Delvientos says yes (for the sake of pension), and so does Captain Sheridan, however, he says it's not for any of the reasons above, but for the sake of creating peace and working out interracial problems. He says Babylon 5 is more or less about making a better future...