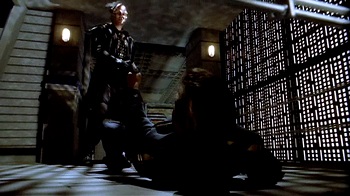 There All The Honor Lies

Their honor? We've had plenty of that ourselves. Conspiracies of silence because the larger ideals have to be protected. But you can't have larger ideals if the smaller ones get compromised.
—Captain Sheridan
Advertisement:

In Sheridan's office Ivanova is ranting. He has just asked her to oversee the new Babylon 5 Emporium, the latest scheme to help the station to become more self-sufficient, something that she feels will demean the station and its purpose. This, Sheridan feels, is exactly why she's perfect to oversee it; her natural outrage will help her see that nothing about the station is demeaned. With that settled, Sheridan leaves for another of Ambassador Kosh's lessons, which he admits he probably won't understand any better after than he does now.

As he walks along, someone runs into him. He doesn't think anything of it... until he realizes his comlink is gone. As he gives chase, he barrels into a Minbari warrior who pummels him and knocks him to the floor. Sheridan notices a PPG lying there and grabs it, pointing it at his attacker, warning him to back off, but the Minbari advances on him, appearing to draw a weapon, and saying "Death first!" Sheridan shoots and the warrior falls down a flight of stairs. As he goes over and looks at the body, he sees another Minbari who quickly runs off.

Later Sheridan is with Garibaldi and Delenn explaining what happened. No weapon was found on the body and since the warrior, Lavell, comes from a prominent family, Delenn has been ordered to conduct her own investigation to determine whether Sheridan should be charged with murder. As she leaves Sheridan orders Garibaldi to find the Minbari witness, and Garibaldi asks for a description.

Sheridan: Bald, with a bone in his head.

In Londo's quarters, Vir receives a transmission from Centauri Prime.

As Garibaldi finishes talking to one of the Minbari on station, Lennier shows up and asks to speak to him. Later he notes to Sheridan how Lennier always seems to be where the investigation goes, and they speculate that he could be in on it, and trying to cover it up. They talk about the link thief, who hasn't been caught, and why he took the link, knowing Sheridan would give chase.

In medlab, the autopsy of the body yields nothing to indicate one way or the other. There is also the question of the gun Sheridan found. Where did it come from? A Minbari would never use a human made weapon. The whole thing is starting to look like a setup.

Talia runs into a drunk Vir, but he runs off before she can find out what's wrong.

Delenn and Lennier have managed to locate the witness, Ashan. Delenn tries to question him, but he refuses, calling her a freak. She leaves, and Lennier rebukes him for insulting her. Despite this, Ashan is willing to talk to him. Later Sheridan insists of being able to talk to Ashan, and try to sort the situation out.

Ivanova arrives at the Babylon 5 Emporium and, while initially open-minded, is completely freaked out when a Markab pulls his face to reveal a human, and the human behind her turns out to be a Drazi in a human mask.

After Ashan has been brought to Sheridan's office, Sheridan tries to question him. Ashan merely calls him "Starkiller." Delenn and Lennier ask if he could be mistaken in what he saw, he asks them where their loyalties lie. The interview is interrupted by a woman who arrived on station earlier and introduces herself as Guinevere Corey, Sheridan's lawyer. Sheridan insists he doesn't need on, to which she responds, "The favorite song of the legally ignorant," much to his annoyance. The Minbari excuse themselves.

Corey explains that she was sent by Earthdome, who has decided to proceed with an indictment. They've decided the best course of action is to take it to trial and accept the verdict, which will most likely be in his favor, but either way, will cost him command of Babylon 5.

A frustrated Sheridan goes to his quarters to cool down, but he doesn't get the chance as Ambassador Kosh shows up for their lesson. Sheridan tells him he's not in the mood, but Kosh feels that it's "Precisely the correct time."

Garibaldi gives Zack Allan a task: follow Ashan and find out what he's up to.

In the worst section of Downbelow, Kosh tells Sheridan to enter a small alcove. When he asks what's in there Kosh tells him, "One moment of perfect beauty." Uncertain, Sheridan makes his way inside, and finds a lone figure who silently moves an offering bowl toward him. Not really having much else, Sheridan drops his command bar in. The figure seems to accept and what appeared to be large orange bags move and begin singing a Gregorian Chant as he, and outside Kosh, listens.

Vir is getting drunk some more when Londo shows up and asks what's wrong. Centauri Prime has decided that Londo's position has grown to the point that someone more important should be his aid, and so they are replacing Vir. Vir doesn't want to go home, because his family didn't want here there. He then gets up and leaves. Londo is about to follow, but suddenly notices a group of women with a doll of himself.

After emerging from his lesson, Sheridan describes his lesson to Ivanova as, "Beauty... in the dark."

Ivanova: It must be working. You're beginning to talk just like a Vorlon.

Delenn has received instructions on preparing Lavell's body by his clan's customs, which she shows to Lennier.

Londo finds Sheridan and Ivanova and demands to talk to them.

Elsewhere, Ashan is wandering around Downbelow as Zack follows, but is suddenly knocked out by Lennier as Ashan meets up with the thief that started the whole thing. Lennier confronts Ashan asking if he honors the truth or clan obligations. Ashan runs off.

In Sheridan's office Londo is objecting to the doll's lack of... "attributes." Sheridan and Ivanova eventually catch on to his meaning and Sheridan orders the dolls pulled immediately. Londo thanks them.

Sheridan seizes on this and is able to coax the admission out of Londo that a certain Minbari once lied to help a certain Centauri ambassador save face, something they find honor in. Sheridan realizes that must be it. Before he can pursue that train of thought a message arrives for him.

Later he finds Delenn in the stations rock garden. He tells her that the Minbari government wants Ashan sent back to the Minbari homeworld. Without him there can be no trial and no way for Sheridan to clear things up, ruining his credibility. Eventually they leave the garden.

In Delenn's quarters, Lennier meets with Ashan, who admits to the plan to discredit Sheridan. The clan was angered by Sheridan's appointment after the dishonorable way (in their view) that he destroyed the Black Star. Lennier also lost family aboard the Black Star but feels there is no more honor in this. Ashan insists Lavell's honor must be protected, at which point Sheridan, Delenn and Garibaldi emerge from their hiding place, with Ms. Corey.

Ashan is led away and Corey asks if they want a confession. Sheridan will settle for a statement clearing him of any wrongdoing, and leave Lavell's motive as just another of Babylon 5's mysteries.

Sheridan and Ivanova run into each other. He asks her opinion on the store, and she gives him a teddy bear wearing a jersey with the initials ‘J.S.' John Sheridan. Sheridan quickly orders the bears removed; in fact he wants the entire store gone. Ivanova smiles and heads off, while Sheridan takes the bear and marches off.

A short time later Warren Keffer is on patrol, trying to track down an unknown object, which he finds when the bear hits his cockpit. He declines to comment on what he's found and heads back in, leaving the bear floating in space.