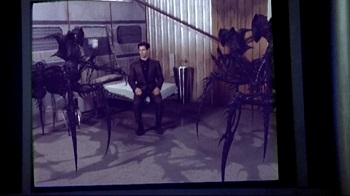 In the Shadow of Z'Ha'Dum

There are beings in the universe billions of years older than either of our races. Once, long ago, they walked among the stars like giants, vast, timeless. Taught the younger races, explored beyond the rim, created great empires, but to all things, there is an end. Slowly, over a million years, the First Ones went away. Some passed beyond the stars never to return. Some simply disappeared.
—Delenn
Advertisement:

As the war drags on, more and more Narn refugees are arriving on the station, so many that they are beginning to tax their resources, and Garibaldi goes to ask Sheridan what to do about them. While the Centauri are having better luck, one in particular is not in good spirits as he goes to meet with his least favorite person. Vir finds Mr. Morden who, noting that Vir doesn't seem to like him that much, asks the Centauri what he wants.

Vir: I'd like to live just long enough to be there when they cut off your head and stick it on a pike as a warning to the next ten generations that some favors come with too high a price. I want to look up into your lifeless eyes and wave, like this. (gives Morden a little wave with his fingers) Can you and your associates arrange this for me, Mr. Morden?

Morden, seemingly unaffected by this desire for his death, hands Vir a data crystal with information Londo is expecting. Before leaving, Vir turns and waves his fingers at Morden.

Garibaldi finds Sheridan in his office going through some of his wife's things. After getting instructions on the Narn situation, he notices something... a picture of Morden. He was on a ship called the Icarus, along with Anna Sheridan. Everyone on that ship died, but Garibaldi insists Morden has been to the station. In fact he's there right now. Confused and upset, Sheridan orders Morden brought in.

Elsewhere on the station, a Mr. Pierce Maccabee of the newly-formed Ministry of Peace is inviting Talia Winters to a meeting, and Dr. Franklin is working to the point of falling asleep at his desk. Ivanova has to order him to take some time off and get some rest.

Morden is heading off the station, but when Zack Allan checks his identicard security escorts him off. Later he sits in a holding cell as Sheridan glowers at him. Sheridan doesn't say anything, but shows a picture of Anna, then a clip of a news story about the Icarus. Morden explains that he was outside in an EVA suit when it happened and lost his memory because of it. Sheridan doesn't buy it, and when Morden tries to leave, he's met with, "You're not going anywhere." Morden reminds the captain that he hasn't been charged with anything, but Sheridan reminds him, that he's technically dead, and won't be leaving until he tells the truth.

In the mess hall, Ivanova listens to Franklin describe how things have been lately. He's seen a lot of patients die, and is beginning to have a bit of a crisis of faith because of it. He's also stating to use stims to keep himself going.

At the Ministry of Peace meeting, Maccabee is speaking to a group of Security personnel about something called Night Watch, a volunteer organization to keep watch for things and attitudes that could destabilize the peace that they are trying to build.

Sheridan's interrogation has gone on for hours, but Garibaldi has had enough. There have been no charges filed and Garibaldi won't watch this continue as Chief of Security. When Sheridan doesn't answer, Garibaldi hands him his security credentials and PPG and walks out of the office. Even with the resignation, Sheridan is determined to continue and pulls Zack to fill in for Garibaldi. He is notified that Vir wants to see him and asks Zack to get Talia.

In his office he's stunned when Vir requests Morden's release. Demanding to know why, Vir will only say that Morden's a guest of the Centauri Republic and thus falls under diplomatic immunity. Sheridan still refuses saying Morden's in protective custody. When asked why, he simply says, "I haven't decided yet."

Ivanova confronts him next; Garibaldi told her about his resignation, and though Sheridan admits he may be in the wrong, he's becoming more determined to find out what happened.

When he asks Talia for her help, she refuses on the grounds that she can't scan anyone without their consent, rightly calling out Sheridan for his attempts to use the letter of the law. She leaves, but Sheridan asks Zack to escort her and have Morden transferred to a certain cell that would have him and Talia to cross paths.

When they do, she sees Morden's face darken and suddenly starts screaming. Then she sees two vague outlines next to him. Zack tells the security escort to get him out of there, as he helps Talia. Later in Medlab, she describes the terrible sensation she felt near him. Sheridan comes in and tries to apologize, but Talia cuts him off with a sharp slap. He watches as she walks off then admits he probably deserved that. Franklin then offers some advice that he has to face the fact that he can't really do anything about losing a loved one, but that he doesn't have to do it alone.

Outside Medlab, Delenn and Kosh find him and ask that Morden be released. Perplexed, Sheridan demands to know who this guy is that everyone seems to have such an interest in. Delenn is reluctant to say, but when she realizes Sheridan won't give in, she looks at Kosh who nods. She agrees to give him the answers he's looking for, but warns him that afterwards, he will never sleep well again.

Delenn: Come, Captain, the greatest nightmare of our time is waiting for you.

In her quarters, Delenn describes ancient races, the First Ones, that existed long before their time but an impatient Sheridan asks what this has to do with Morden. Delenn explains that there are some that stayed behind to wait for the Shadows.

This piques Sheridan's curiosity, and Delenn explains that is the only name they have for them. The Shadows are one of the most ancient of races and have reappeared many times over the ages, causing wars and destruction each time. Since the last time the Shadows and First Ones fought, all have left, except one... the Vorlons.

Delenn: That is why Kosh cannot leave his encounter suit. He would be recognized.
Sheridan: Recognized? By who?
Kosh: Everyone.

Delenn then tells how last year she sent a message to Kosh, to which the answer was "Yes." The question: "Have the Shadows returned to Z'Ha'Dum?" Sheridan remembers this name. It's the place G'Kar had been warning them about.

Kosh's eyepiece opens and begins to show recording of the Icarus arriving to explore a newly-discovered world, Z'Ha'Dum. The crew land and begin their explorations, eventually encountering the Shadows.

Delenn explains that once the Shadows were awoken, they could not allow anyone to leave and spread word of what they'd found. Sheridan protests that they don't know that Anna was killed and that Morden...

Delenn: Must be released!

Incredulous, Sheridan asks how she can ask that. Delenn explains that the Shadows do not know how much they know. They are moving slowly, trying to build their forces before they attack, but if Sheridan presses him, sooner or later Morden will confess, and the Shadows will attack before they are ready. She explains that Morden is never alone and then tells Sheridan that he must now make the most important decision of his life, whether to seek revenge or choose the greater good.

Later Sheridan is in the security station staring at Morden on the monitor. Zack comes in and they have a discussion about choosing to keep secrets, even knowing what the cost might be. They then hear strange sounds coming from Morden's cell. Remembering what Delenn said about him never being alone, Sheridan asks Zack if the monitors can see in other wavelengths. As Zack adjusts the monitors, Sheridan suddenly sees two creatures by Morden and calls for Zack to stop. The figures vanish and Zack asks what he saw.

He orders Zack to release Morden and tell him it was all a mistake.

Later he finds Garibaldi, tells him he was right and invites him to come back. He doesn't tell him why, though, but assures him it will not happen again. Sheridan leaves and Zack comes up, sporting the black armband of the Night Watch. He figured it was extra credits to do what he does anyway, so why not?

Sheridan goes to Kosh's quarters and makes a request. He wants to know how to fight the Shadows and defeat them, because someday he is going to Z'Ha'Dum.