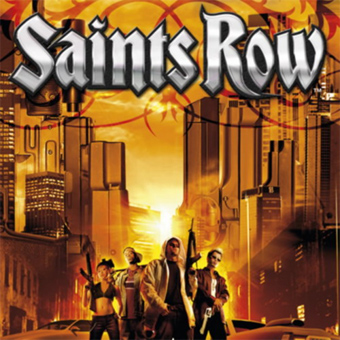 Saints Row. Sinners welcome.
If ya sick of being sick, and ya tired of being broke
Go get yo guns and bring yo ass to Saints Row
(Saints Row!!) Bitch!, (Saints Row!!) Bitch!
— David Banner, "Saints Row"note the Theme Song of the game, unlocked upon collecting all 60 CDs scattered throughout the game world

The first game in the Saints Row series.

You create your soon-to-be antiheroic mime (nicknamed "Playa" in the first game, "Boss" in the following ones), who starts out as just a random Joe walking the streets before being thrust into the middle of a four-way gang war by being in the wrong place at the wrong time. When the Third Street Saints rescue him, he joins their gang and has to help them reclaim first their neighborhood, then the city of Stilwater (based on Detroit and other Midwestern cities) from the other three gangs:

However, just as you think the game is over, a short new line of missions reveal themselves, leading to a turn of events that result in "Playa" being caught in a boat explosion — he survives, however, and the resolution is revealed in the second game.

After over a decade without any sort of rerelease, port or remaster, Saints Row was finally made backwards compatible with the Xbox One system in mid-2018, much to the rejoicing of long time fans.