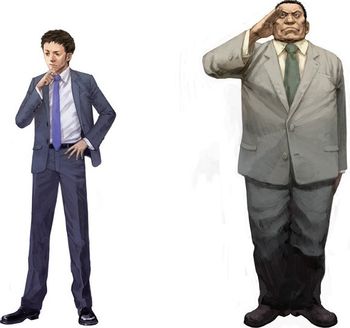 Assistant Inspector Junya Kazami and Sergeant Soichiro Kogure are on the case.
Advertisement:

Hayarigami (Officially known as 流行り神警視庁怪異事件ファイル - Hayarigami Keishicho Kaii Jiken Fairu — Sudden Popular God Tokyo Metropolitan Police Department Strange Case Files) is a Survival Horror Visual Novel game in the Hayarigami franchise made by Nippon Ichi. This is the first in the main Hayarigami game trilogy that takes place entirely in the Greater Tokyo Area. This is one of the few games that isn't officially released by NIS outside of Asia.

It was originally released on the Playstation 2 with a regular and limited edition on August 8, 2004. Due to the game's success and favorable reception by critics and gamers alike, the game was ported/remade by NIS for the PS2, the Playstation Portable and the Nintendo DS, most of them having new scenario content or new characters as Hayarigami Revenge - Keishicho Kaii Jiken Fairu (流行り神Revenge警視庁怪異事件ファイル — Sudden Popular God Revenge Tokyo Metropolitan Police Department Strange Case Files) for the PS2 on July 14, 2005, Hayarigami Portable - Keishicho Kaii Jiken Fairu (流行り神Portable警視庁怪異事件ファイル — Sudden Popular God Portable Tokyo Metropolitan Police Department Strange Case Files) for the PSP on December 15, 2005 with a "Best Price" release on July 5, 2007 and a digital release on July 1, 2009 and finally, Hayarigami DS - Toshidensetsu Kaii Jiken (流行り神DS都市伝説怪異事件 - Sudden Popular God DS - Strange Urban Legend) for the DS on June 11, 2009. The games were given a 15+ rating (Currently C rating) by CERO due to the mild violent content.

A tie-in novel known as Hayarigami Keishicho Kaii Jiken File 0 (流行り神警視庁怪異事件ファイル 0 — Sudden Popular God Tokyo Metropolitan Police Department Strange Case File 0) was released by Famitsu Bunko in 2004. The events in the novel take place during the events of the first game. A Drama CD was released in the limited edition version of the game.

Players assume the role of Assistant Inspector Junya Kazami, a once promising detective in the Tokyo Metropolitan Police Department's Criminal Investigation Bureau's Section 1. At the start of the game, he was ordered to be transferred to the MPD's Historical Archives Section instead, located on the 5th basement floor, due to a troubling incident that involved him. Kazami is assigned to work with Sergeant Soichiro Kogure, another officer assigned to the section and his subordinate under the command of Inspector Ranko Inudo. The two men subsequently investigate occult cases if a criminal is using the paranormal to commit criminal activities or if the paranormal is truly involved after all. Their first case together sets them to investigate an urban legend called Chain Mail that has information on a Serial Killer responsible for a string of murders in the GTA...

To make progress in a case, the game calls for the use of "Inference Logic", a relationship chart where players determine the relationship between the suspect/s, witness/es and persons of interest over a case. Completing the chart will yield more information to help a player progress. "Self-Question" relates to how the case progresses if Kazami is sure that it can be explained by science or by paranormal means. "Courage Points" are used during certain question scenarios where its use can determine the progress of a case. Running out of them will impede your progress in making a choice that has a point embedded, so be very careful with them.

There's an attempt to make the series as a live-action movie, but Music Cinemas Japan went bust as of 2012, so NIS placed it on indefinite hold.

There's an LP of the game

done in Japanese by Mr Charzaku.

An LP of the game

in English is being done by Tainted Beef.