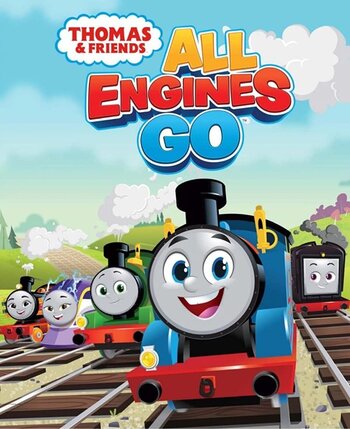 Thomas & Friends: All Engines Go is a Continuity Reboot of the original Thomas & Friends series that premiered in 2021. As a result, the show is indirectly based on The Railway Series by the Rev. W. Awdry. Britt Allcroft is credited as the creator as she originally created the Thomas & Friends brand, despite having no involvement with this show. Originally announced as the 25th series of Thomas & Friends, it was later confirmed to be a new show with its own continuity and premise due to the original show being cancelled due to low, disappointing toy sales.

In 2020, Mattel Television announced a new co-production partnership with Corus Entertainment's Nelvana Studio. 104 11-minute episodes and two 60-minute specials were greenlit for the Thomas & Friends television series over two seasons. The new format will feature "a new look and story structure", original songs and Thomas as the hero of every episode.

Unlike the previous series, this one is 2-D animated and is the first in the franchise to not feature a narrator. It focuses on Thomas and his best friends Percy, Nia, Diesel and Kana as they work, play and learn on the Island of Sodor under the supervision of Team Dad Gordon. Thomas and his friends are depicted as much younger, and are now able to move themselves, no longer needing drivers or firemen. The episodes feature two segments each in a 11-minute format.

The series debuted on Cartoonito in the US on September 13, 2021. The first episodes started airing in Mexico on Televisa's Canal 5 in August of 2021.