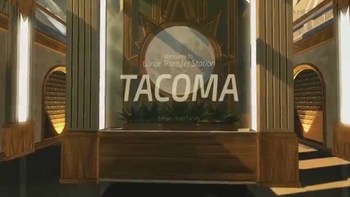 Tacoma is a 2017 Science Fiction Environmental Narrative Game for PC, Mac, Linux and Xbox One, created by Fullbright, the studio behind 2013's critically-acclaimed Gone Home.

The year is 2088, and hypercorporations have a key influence on society, being responsible for spearheading the exploration of new possibilities and venues in space travel, orbital habitats and artificial intelligence. One such hypercorporation is the Venturis Corporation, which has recently been experiencing serious problems with the space station, Tacoma, orbiting the Moon. Three days ago, Tacoma was hit by a meteor strike, damaging its oxygen tanks and communications array, and the fate of its crew, a six-person team of specialists, is currently unknown.

The player is put in the shoes of Amitjyoti "Amy" Ferrier, a subcontractor send by the Venturis Corporation to Tacoma with orders to find out what happened to the crew and to retrieve the core components of ODIN, the AI system that played a huge part in the running and maintenance of the station.

Not to be confused with a neighbor city of Seattle (though it is the namesake for the Space Station for which the game is named.)