Video Game / The Swords of Ditto 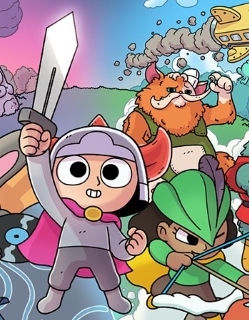 The Swords of Ditto is an Action-Adventure game with Roguelike-style RPG Elements, published by Devolver Digital and developed by onebitbeyond, a London-based development studio led by Jonathan Biddle, formerly of Curve Digital.
Advertisement:

Every 100 years, an evil witch named Mormo unleashes her magic across the island of Ditto, and a hero takes up the mantle of the "Sword of Ditto" to challenge and defeat her. To do so, they must find the Toys of Legend and destroy the Anchors that give Mormo her power — all within four days.note The first major update, called the "Timeless Update", dropped the four-day time limit, allowing you to explore the island at your own pace. Whether or not the task is complete, the hero must enter Mormo's Palace on the day of the showdown and fight the witch for the fate of Ditto. Regardless of whether the Sword wins or loses, the cycle begins anew, with a new island and dungeon structure being generated with each new playthrough.

The game was released on April 24, 2018 on PC and PlayStation 4. On May 2, 2019, a Nintendo Switch version was released, along with the game's second major update, entitled "Mormo's Curse."

Has nothing to do with a Pokémon.