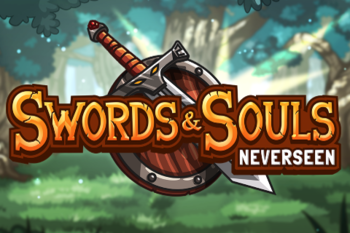 Swords & Souls: Neverseen is a Role-Playing Game developed by Soul Game for computers running Windows and Nintendo Switch in 2019 and is a sequel to Swords & Souls. In it, you play as a Soul who was travelling on a ship and reaches the Neverseen, but it crashed which caused him to lose consciousness. He is woken up by Sir Pupset, a rude training dummy, who rsends him to explore. After going to a tavern and talking to the owner Hops, the player finds out that a witch has taken his precious Wendy and the player needs to save her, but first he must collect four Super Treasures scattered across the land.

Thanks to a change of engine from Adobe Flash to Unity, the game typically has better performance. There are now six weapon types and up to three enemies can be fought at once with you potentially having a pet and a mercenary to help out. Blocking, dodging, and ranged attacks are no longer chance-based, but can be done with specific buttons when available.