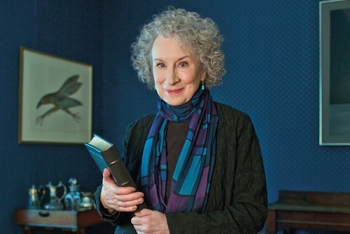 She is VERY Prolific, having published 12 novels and 15 poetry books, on top of short story anthologies and other works. She is one of the most acclaimed authors in recent history: she has either won or been a finalist for Canada's Governor General's Award (one of Canada's highest prizes for an author) seven times. She has also earned the Arthur C. Clarke Award for best Science Fiction, LA Time Fiction Award and Prince of Asturias Award, and has been nominated or won the Booker Prize five times.

Also not a bad goalie.