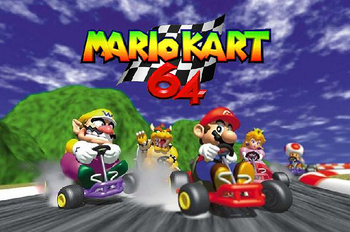 Mario Kart 64 (released in 1996) is a racing game for the Nintendo 64 and the sequel to Super Mario Kart. The game is the first game in the series to be in 3D, and allows up to four players to play.

New items were introduced to shake things up such as triple shells, triple mushrooms, banana bunches, and the infamous Spiny Shell.note The Spiny Shell cannot be used by computers. The game would be the first to introduce "Extra", the original name for Mirror 150cc where tracks were flipped horizontally.

Oh, and the formula is all but unchanged from the original.

Every track from this game with the exception of Wario Stadium has shown up in one incarnation of this game from Mario Kart DS onwards.

This game would be re-released on the Wii Virtual Console in 2007, and later on the Wii U in 2016. It was also one the launch titles for Nintendo Switch Online's library of Nintendo 64 games.