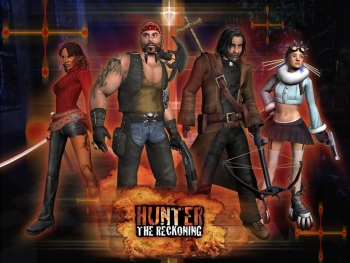 Hunter: The Reckoning spawned three beat-'em-up video games for the Xbox, PlayStation 2, and Nintendo GameCube, which were published by Interplay and Vivendi and developed by High Voltage Software. All three are multi-player hack-and-slashers in the spirit of the original Gauntlet, and developed a modest fan following as excellent four-player party games.

The original game, Hunter: The Reckoning, is set in the small town of Ashcroft, which was built around a penitentiary of the same name. For more than fifty years, the prison was run by a vampire named Cornelius as his own private playground and feeding pen. Cornelius's necromancy barely managed to bottle up the angry ghosts that haunted the prison grounds.

One day, the convicted murderer Nathaniel Arkady is executed at Ashcroft Penitentiary, and all hell breaks loose. The vengeful dead rise up all at once and attack everyone inside the prison. Four ordinary people are abruptly Imbued, given powers by an unknown agent to defend humanity against the supernatural. These four - the Avenger, Spencer "Deuce" Wyatt, a biker whose mother was killed by Arkady; the Defender, Samantha Alexander, one of the cops who arrested Arkady; the Martyr, Kassandra Cheyung, a teenage raver and heir to a manufacturing fortune; and the Judge, Father Estaban Cortez, the priest who gave Arkady his last rites - are able to work together long enough to escape the prison and seal the ghosts up inside it.

A short time thereafter, the prison is the site of an illegal rave, which draws in kids from all over the state, and that's enough to unleash the angry ghosts against the entirety of the town of Ashcroft. The four hunters return to Ashcroft to find it burning to the ground, and must rescue the surviving civilians while finishing off the ghosts of Ashcroft once and for all.

Two years later, in Wayward, Ashcroft is mostly empty, although people are slowly returning to it. It's still a focus of dark power, though, and two Wayward Hunters go missing within the city limits. The original four hunters, after seeing the calls for help on Hunter.net, reunite and return to Ashcroft.

The final game in the series, Redeemer, is set ten years after the original game. Kaylie Winter, who was orphaned by the monsters in the original outbreak, has grown up under Estaban's care and become a hunter herself. She calls her adopted father and his allies back to Ashcroft, which has been revitalized by the presence of the corporation Genefex. Unfortunately for Genefex, it's unaware of Ashcroft's history, and it's being manipulated by unseen forces.

Interesting trivia for webcomic fans: the lead designer on the original Hunter, David Rodriguez, is the writer of Shadowgirls, as well as the independent comic Starkweather.

Tropes in the Hunter video games include: